"Realizing the lack of a completely authentic comic strip story of a metropolitan police force in action, the producers of the famous Dragnet program including creator Jack Webb, have arranged for the presentation of their stories in picture form.

"The series will go behind the scenes with Detective Sgt. Joe Friday and his partner."

A reader of this blog reminded me of yet another aspect of the Dragnet show.

There was a comic strip that ran in newspapers. As with the TV show, they advertised the comic strip after some of the radio shows. There was also a Mad Magazine parody.

They built interest and excitement with a series of illustrated ads such as the one above. They were published in a countdown type fashion. Each featured the comic likeness of the Joe Friday character. Finally we saw, "Starts Today!"

The Miami Daily News at least implied that they published the Dragnet comic exclusively though the ad that followed the radio show didn't suggest that. The comics would, in return, have ads for the times and local stations where people could see or listen to the show.

The comic-strip is said to have run 1953-1955 and could be found in multiple newspapers.

On a brief search of other available US papers, I couldn't find it during that time period.  That definitely doesn't mean it didn't run elsewhere.

When movies or TV shows get this pervasive you start hearing the inevitable joke asking for a Dragnet on Ice version.

"It was Thursday, July 16th. It was warm in the city. We were working General Assignment out of Hollywood Division. My partner is Frank Smith. The boss is Captain Bert Jones. My names' Friday. We'd gotten a call from a real estate agent that some property had been stolen from a bungalow in the Hollywood area. We had to check it out."

"Every relevant and interesting phase of police procedure will be shown in the Dragnet strip. The correct procedure for fingerprinting, ballistics and testing, as well as investigations, line-ups and interrogations will be covered.

"The stories in Dragnet are true complete and authentic in every sense. Every incident in the comic strip is carefully checked and receives police approval for authenticity."
-- Miami Daily News, October 13, 1953

Like George M. Cohan, Orson Welles and others, Jack Webb was intent on getting his name and his brand name out there wherever he could. Director William Castle learned this same lesson when he worked with Orson Welles.

"Realizing the lack of a completely authentic comic strip story of a metropolitan police force in action," what a great line for marketers and creative types. There is something the world lacks that only you can provide.

I am no expert on the show, this comic or comics in general.  If you have interest in comic art, artists, illustrators, illustrated books, you should check out a publication ImageS created by Jim Vadeboncoeur, Jr. He is very knowledgeable on the subject, having written a book and been a consultant for others.


Most very reasonably priced these days, the show had its share of paperback tie-ins and included Dragnet "Case Histories from the Popular TV Series." 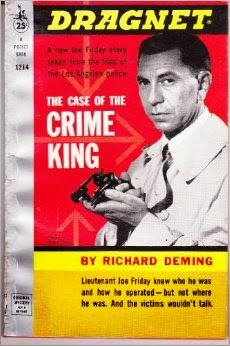 Dragnet: The Case of the Courteous Killer even has a Kindle version

In this book, Joe Friday has been promoted to Lieutenant. He had that rank briefly during the run of the show but had the character made a Sergeant again, deciding that sergeants saw more action.

James Cagney is George M. Cohan the Yankee Doodle Dandy, Where were you in '42?