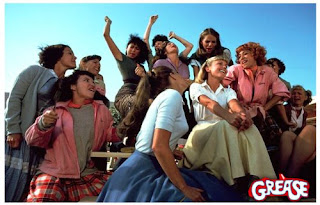 Gather for a Grease Sing-along. On July 29, 1978 The film soundtrack to Grease reached number one on the US album chart.

John Travolta and Olivia Newton-John starred in the film. Remember Look at me, I'm Sandra Dee, Hopelessly devoted to you?

Craving a summer Grease movie sing-along? Get the family, the Pink Ladies and the T-Birds together one more time. Teach the next generation the lyrics and the dance moves. Here's some exercise that's fun.

Enjoy your Summer Nights. Go on. You're the one that they want! See if your town's show is on the list.

Have a sing-along in your own living room or better yet, get a big screen and have it outside by the pool for friends and family! With Grease on DVD

you won't have any watermarks, commercials or edits to deal with.

Rock some costumes, plan a menu, a pre-show or after-party...

Who will you dress as? Dust off that leather jacket! Sing like nobody's listening? Grease is the word. :-)

Here are a few coming up soon.

Headed to the Toronto Film Festival May 2014? There's a screening Friday May 16

May 22-26 The Castro Theater San Francisco

The Prince Charles Cinema in London has a few dates this year starting August 30th.

Summer dreams ripped at the seams
But, oh, those summer nights
Tell me more, tell me more

Posted by ImagineMDD at 8:25 AM No comments: Links to this post